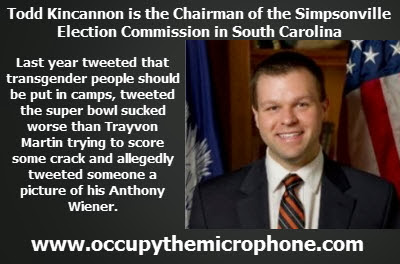 Todd Kincannon is the Chairman of the Simpsonville Election Commission and a former GOP state leader, last year tweeted that transgender people should be put in camps, tweeted the super bowl sucked worse than Trayvon Martin trying to score some crack and allegedly tweeted someone a picture of his Anthony Wiener. Tune in Live at Five today to Occupy The Microphone as they try to make sense of the senseless.