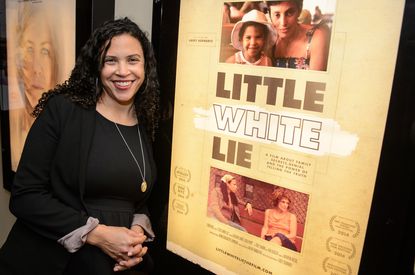 The Context of White Supremacy welcomes Lacey Schwartz. Ms. Schwartz is a non-white female with a White parent. She’s an alumnus of Harvard Law School, and a documentary filmmaker. We’ll discuss her 2014 film Little White Lie. The film explores Ms. Schwarz deceptive childhood. Her White mother (Peggy Schwartz) told her that her dark skin tone was the result of her “swarthy,” Sicilian grandparents. It was not until her college years when she confronted her mother, and got the truth. Her birth was the product of her mother’s extramarital affair with a black male. Her White father regarded this as the “ultimate betrayal;” Lacey’s parents later divorced. We’ll ask about her “White” childhood and incidents where Whites impugned her membership in the White club. We’ll also see how she was treated by black people before and after her epiphany. Addendum. Gus T. was not able to view this film until after this broadcast – it was not a widely distributed film initially. After viewing the film, Gus concluded Ms. Schwartz was not honest during her discussion of The C.O.W.S. Whites in her documentary made statements that revealed they did not think Ms. Schwartz was White even as a child.