We are back on air after thunderstorms briefly knocked out power. Today we will look at the news wire and open up the lines for callers.

The NYPD assault on former tennis pro James Blake has been making the news with some outlets going out of their way to say it wasn’t about race. Blake himself has played down the possible racial aspect which is codified and smart on his part. As was the case with Daniel Pantaleo, the NYPD cop that killed Eric Garner, the cop in Blake’s case also has a history of police brutality lawsuits. New York Daily News reports, Officer James Frascatore, on the force for four years, is a defendant in four ongoing civil cases that charge he and other officers used excessive force during false arrests.

The dangers of black people severely damaged by white domination that have access to public media. James Blake specifically mentioned the value of having a mic and a platform to express his victimization at the hands of police thugs and issue a public call that bad cops be held accountable for their misconduct.

However, unfortunately a black comedian who lives in Charlotte, NC which is fresh off the non-conviction of CMPD cop Randal Kerrick who shot an unarmed Jonathan Ferrell in the chest 10 times, is making uninformed and outright slanderous lies about the James Blake case. QCB as in Queen City Brother is a local comedian working the club circuit who just happened to intern at Sports Radio station WFNZ and they gave him about 10 mins to tell jokes on air to a mostly southern white male audience that also has a digital radio station with tens of thousands of subscribers. 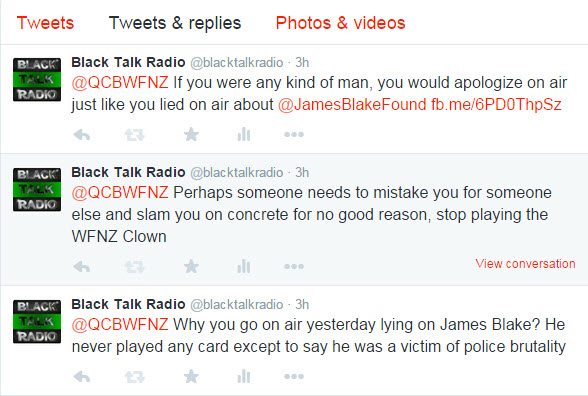 There is a problem with white people telling lies in media but when black people do it, it is far more damaging as it helps validate the implicit bias a lot of white supremacist have self tested for in a Harvard study. Perhaps QCB apologizes sometime in the future for trying to be play a reporter on the radio without establishing context and facts before taking to the airwaves to misinform hundreds of thousands of people in 3 mins or less. He should quit his act altogether or at least develop some less offensive material for his 3 min comedy act on white people’s radio.