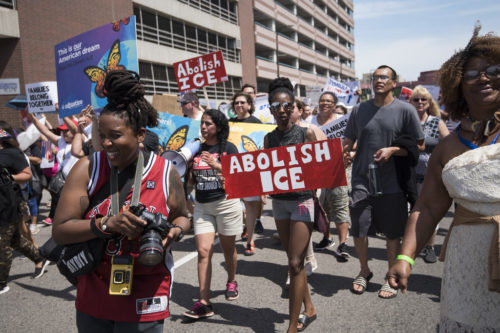 BTR News – Using children as political props in which to shame or embarrass a nation or leaders of that nation is nothing new in US politics. Sometimes the concerns raised are legitimate, sometimes they are illegitimate and sometimes it is both.

It should be evident now that just like during the 2016 Presidential race, cable news networks were oversaturating the news cycle with news stories about Donald Trump and a CNN network boss said as much saying Trump was good for ratings and ratings are good in attracting paid advertisement. I suspect the same holds true today as newsfeeds are saturated with Trump coverage, some of it legitimate news coverage and a lot of it seems petty, biased and a waste of digital space.

However, a lot of news coverage about the mistreatment of South and Central American refugees and their children is very legitimate and this commentary should not be construed as an objection to that coverage. What I am questioning is the motivation not just of the news coverage but the political grandstanding by Democrats.

Case in point. Recently two children died of apparent illness while in the custody of immigration officers which has caused the Secretary of Homeland Security to do some explaining about the conditions of detention for refugee children. We have had wall to wall media coverage on the cable news networks about those two unfortunate deaths. However, when the Miami Herald produced an editorial report just last week published details surrounding the murder of a 17-year-old troubled teen who was locked up in Miami-Dade Regional Juvenile Detention Center, it elicited no national coverage. Five staffers at the juvenile lockup were fired in connection with the death of Elord Revolte who was viciously beaten to death by other juvenile detainees allegedly at the behest of guards. “Elord should have gotten immediate medical care. He didn’t. Staffers waited a full day before calling an ambulance to get Elord to a hospital” and “within days, up to 15 young detainees told their attorneys of the practice of inmates being offered honey buns by guards in exchange for hurting or disciplining other detainees.”

If you think this is an isolated incident then take a look at the allegations made by a former Texas Department of Justice employee Dominique Mitchell turned whistleblower in March of 2018 who alleged that guards routinely physically abused the children in their custody and care and would withhold food from them. Beto O’Rouke a Texas Representative who failed in his bid to unseat Senator Ted Cruz but is being pushed by establishment Democrats to run for President garnered national media attention in calling for the closure of a Texas immigration facility detaining children citing human rights concern.

The national cable news media did not devote much coverage if at all to these two stories about American children being abused in juvenile detention facilities. Beto O’rouke did not call for the closing of the Texas Department of Justice facility the whistleblower spoke about. This leads me to believe that both the media and Democrats are not as concerned about the mistreatment of children as they would have us to believe. In the seven years that I have been producing New Abolitionists Radio, I can recall a number of stories concerning the mistreatment of children by guards and administrators in juvenile detention facilities. Don’t get me started on the abuses seemingly rampant in the foster care system.

All I am suggesting that in addition to the outrage of the mistreatment of refugee children, the same level of outrage if not more should be directed at the abuse of American children by those charged with their care in both the federal and state systems.

In some encouraging news, a bi-partisan coalition of federal legislatures and progressive and conservative groups were able to get President Trump to ban the use of solitary confinement aka torture of juveniles in federal facilities in most cases. We still have a long way to go in bringing about very much needed reform for the sake of all children in custody anywhere within the United States.

Black Talk Media Project founder Scotty Reid is the host of BTR News podcast and New Abolitionists Radio which he co-hosted for several years and now is the executive producer. He has been producing news talk radio and podcasting since 2007 and has interviewed hundreds of guests on various topics. He is also a freelance writer who focuses on social and political issues around the world and has been published by various outlets.