NYC Jericho Movement – As many of you know, Jalil has been to the parole board ten times since 2002, when he first become parole eligible.

Jalil has been denied each time for a variety of reasons, all of which are tantamount to the nature of the crime—something that will never change.

After the last parole hearing and denial, pursuant to NYS Constitutional Article IV, Section 4, Jalil filed an Application to Commute the Sentence to Time Served with NYS Governor Andrew M. Cuomo. Governor Cuomo has the authority to grant the Application and order Jalil’s immediate release from NYS DOCCS custody.

Since the Application’s submission, it has been revealed that the NYS Board of Parole had a “secret deal” with the NYC Police Benevolent Association (PBA), permitting them to submit opposition letters directly to the Board of Parole from their website. These opposition letters negatively influenced the decision-making process, ensuring Jalil would not receive a fair and impartial parole hearing. During Jalil’s 2014 parole hearing, he was told that “current and former members of law enforcement” were parole commissioners, many of whom decided to deny his release.

On December 4th & 5th, 2016, The New York Times published an extensive exposé entitled “The Scourge of Racial Bias in New York States Prisons” that informed: “The racism can be felt from the moment a black inmate enters New York’s upstate prisons.” This implacable racism has been institutionalized in the entire parole system, permitting subjective biases of parole commissioners to influence parole decisions.

Since the submission of the Application to Commute the Sentence to Time Served, Governor Cuomo has received many letters and communications urging him to grant Jalil’s Application. However, due to the revelation of political collusion between the Board of Parole and the PBA, and the PBA/media backlash and scrutiny of the Parole Board’s release of Jalil’s co-defendant, it has become necessary to launch this May Day Initiative in support of Jalil’s Application.

Jalil exceeds all requirements for release. His release on parole has been supported by activists, academics and community leaders from across the country and around the world, including Archbishop Desmond Tutu and the family of one of the victims. The political nature of his conviction has prevented parole commissioners from giving fair and impartial consideration to his release, despite the overwhelming community support.

He has established many programs, such as the first Men’s Group for therapeutic training in the NY State prison system, an African/Black Studies program, a computer literacy class, a Sociology class, and a poetry class. He has received two commendations for preventing prison riots. He has raised money for the children’s fund, was the office manager of the computer lab and a teacher’s aide for GED classes.

Jalil is also the recipient of several certificates for rehabilitation programming and is a published author, poet, educator and blogger. 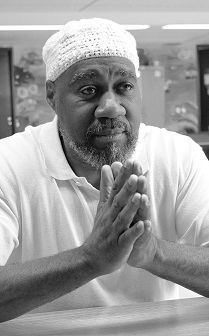 As a human rights advocate, he had the first U.S. prisoners national petition heard and recorded by a Special Committee at the United Nations on U.S. prisons and the existence of U.S. political prisoners. He has litigated several civil rights complaints on behalf of prisoners. In 2000, Essence magazine featured an article on father-daughter relationships. The article, entitled “Daddy Says,” quoted Jalil stressing the importance of maintaining these relations even during incarceration.

We request that people do the following for Jalil throughout the month of May:

On May 1, 2019, May Day, we are requesting that Friends and Supporters call, tweet, email and write NYS Governor Andrew M. Cuomo’s office and appeal to him to grant Jalil’s Application to Commute the Sentence to Time Served.

We also request that this May Initiative be widely posted on social media platforms, encouraging freedom loving people around the world to join in this initiative.

Since this will be ongoing throughout the month of May, we propose that people tweet and/or email Governor Cuomo every Monday, Wednesday and Friday, and call and write the Governor every Tuesday and Thursday.