The international human rights organization Reprieve is reporting in a press release that a US judge dismissed a due process case challenging the US government’s assassination program and whether it violates the US Constitution. The expanded power of the US executive branch which includes intelligence services has virtually gone unchecked over the past two decades.

Reprieve – A US court today dismissed the case of an American man trying to establish whether the U.S. can assassinate its own citizens, without telling them why or offering them their constitutional right to due process.

While acknowledging that there may be no ‘constitutional right more essential than the right to due process’, Judge Rosemary Collyer of the DC District Court said the federal courts nonetheless were blocked from weighing in on the matter because the government had invoked state secrets. In doing so, the US government is protected from having to disclose the very information necessary to Mr Kareem’s claim of due process – the allegations against him, which led to him being targeted in the first place.

Mr Kareem alleges that he was nearly killed by US missiles on five separate occasions in 2016, while working as a journalist in Syria. In June 2018, the U.S. District Court for the District of Columbia held that he could plausibly infer that he had been placed on the ‘kill list’ – and that the Government must afford him his due process right to find out why. 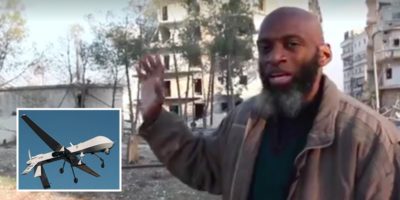 The Government’s lawyers subsequently sought to have the case thrown out on the grounds that it would prejudice national security if state secrets were to be revealed at trial – effectively arguing that the U.S. drone programme operates beyond the reach of the Constitution, even when it targets Americans.

Jennifer Gibson, Staff Attorney at Reprieve and co-counsel for Mr Kareem, said: “Today, a court ruled that the US Government could kill an American citizen without due process. In so doing, it allowed the Trump Administration to run roughshod over the Constitution and tacitly approved the executive’s exercise of unfettered power over its citizens in the name of ‘national security. Yet again, the Government has been allowed to wield excessive power, and hide behind the spectre of ‘national security’ to deprive people of their most basic of rights: the right to life and due process.”

Tara Plochocki at Lewis Baach LLP, attorney for Mr Kareem, said: “We are very disappointed in today’s decision. For the first time ever, a United States federal court ruled that the government may kill one of its citizens without providing him the information necessary to prove that he is being wrongly targeted and does not deserve to die. In its initial decision in this case, the court correctly found that Mr. Kareem had a constitutional right to due process before the US government could take his life. Today’s decision, upholding the government’s invocation of the state secrets privilege and dismissing his case renders the right to due process effectively meaningless for Mr. Kareem. The US Government could have provided this information but chose not to and the Court found that the Government’s assertion of national security trumps his right not to be killed. We will continue to pursue all avenues to protect Mr. Kareem, and all US citizens, from being executed without having a meaningful chance to be heard.”