In this episode of Conversation Reparation, host Jumoke Ifetayo shares the platform with the offspring of NCOBRA leaders. They will share their perspectives on the reparations movement and the recent uprisings in the USA and around the world in response to the police murder of George Floyd, Breonna Taylor, and others. 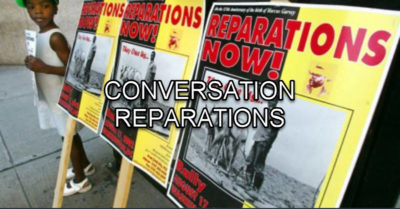 Conversation Reparations is hosted by Jumoke Ifetayo SE Region Representative of NCOBRA and he can be contacted by email at reparationsj@gmail.com or 678 437-7882

Conversation Reparations is an hour-long digital radio broadcast and podcast focusing on the issue of Reparations. It is hosted by Jumoke Ifetayo and Bonita Lacy of N'COBRA. The program is broadcast live on the 1st and 3rd Mondays on the Black Talk Radio Network.