By Scotty T. Reid – Once again Donald Trump is displaying irrational behavior as it relates to his becoming infected with COVID 19. Trump isn’t the only famous person to become infected with the virus as a number of NFL players are testing positive for the virus with one of the most high profile players being Cam Newton, star quarterback for the New England Patriots. By the way, since Trump bragged about football being back due to his efforts, which is probably another lie, will he take credit for all the positive cases the NFL is experiencing, right now? Of course, he won’t.

Trump in an interview with journalist Bob Woodward, said he knew the virus was deadly and was airborne but he made a conscious decision to minimize the virus in public perhaps more worried about the pandemic’s effect on the economy than its effect on the people.

According to the Guardian,

“On 7 February he told Woodward in a phone call: “It goes through the air. That’s always tougher than the touch. You don’t have to touch things. Right? But the air, you just breathe the air and that’s how it’s passed. And so that’s a very tricky one. That’s a very delicate one. It’s also more deadly than even your strenuous flus.”

He added: “This is deadly stuff.”

Despite acknowledging to a reporter that “this is deadly stuff”, publicly Trump played down COVID like it was no big deal. Despite the revelation that Trump knew the virus was to be taken seriously, he continues to publicly push the notion that it isn’t. After being treated with an experimental treatment involving antibodies and an experimental drug, Trump took to Twitter once again play down the virus. 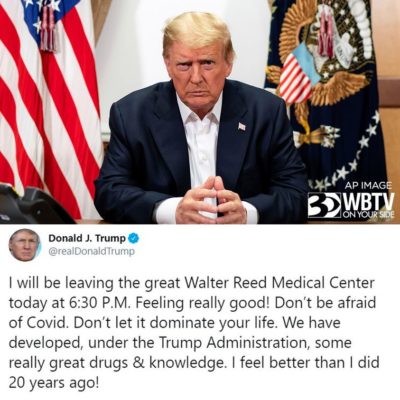 “I will be leaving the great Walter Reed Medical Center today at 6:30 P.M. Feeling really good! Don’t be afraid of Covid. Don’t let it dominate your life. … I feel better than I did 20 years ago!”

To date, the virus that causes COVID 19 has killed over 210,000 people in the United States including one high profile case involving Herman Cain, a former Republican candidate for president who died this year after contracting the virus at a political rally.

The NFL has not been able to limit exposure to the virus as the NBA has with its bubble in Orlando, Florida. As a result, games have been canceled with several players, and staff of NFL teams testing positive for the virus including future Hall of Famer Cam Newton who also put out a statement on social media about his contracting the virus.

Unlike Trump, Cam Newton took the virus seriously and his statement is what you would want to hear from a President of a nation in the depths of a serious pandemic.

Hello Everyone,First off, I want to thank everyone for your concern and support. While this is a scary, I am hoping…

“First off, I want to thank everyone for your concern and support. While this is a scary, I am hoping for a speedy recovery and doing everything I can to protect myself and limit further exposure.

Please take the guidelines set by the CDC seriously. Wear your masks, keep your distance from others and wash your hands regularly. Though people age 60 and older are at risk of becoming seriously ill, I do want to remind everyone that we ALL are at risk of being infected by COVID19.”

It is what it is and unfortunately, there seems to be nothing anyone can do to impart leadership qualities to a man who is stubborn, full of himself, and is nothing more than a carnival barker. While he has access to healthcare and experimental treatments and expensive drugs, that isn’t the case with the general population where millions are underinsured or not insured at all and people like Trump don’t care about the impact the virus is having on vulnerable members of the population. So when people like Trump say “All Lives Matter”, they really don’t and that is quite evident by Trump’s words and actions during this pandemic.