BTR News hosted by Scotty T. Reid will continue to examine the fallout from the insurrectionist white power grab by Donald Trump and his supporters in Washington, DC last month. One of the things coming out is the large number of off-duty police officers who joined the DC insurrection and this may be why the DC Capitol police were perceived to be soft on Trump’s supporters while being brutal to BLM protesters.

The FBI is in the news after a researcher obtained FBI documents via an FOIA request that reveals the conspiracy between the FBI and Chicago Police to assassinate Fred Hampton in his sleep on Dec 4, 1969.

After we examine what’s in the news, we will be joined by columnist, cable pundit, and best-selling author Charles Blow to discuss what African Americans could be doing to mount a political power grab of their own by means of reverse migration to the South.

Blow writes, “Race, as we have come to understand it, is a fiction; but, racism, as we have come to live it, is a fact. The point here is not to impose a new racial hierarchy, but to remove an existing one. After centuries of waiting for white majorities to overturn white supremacy, it seems to me that it has fallen to Black people to do it themselves.”

THE DEVIL YOU KNOW: A Black Power Manifesto By Charles M. Blow is published by HarperCollins and went on sale on January 26, 2021. 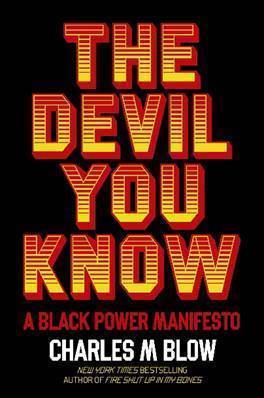