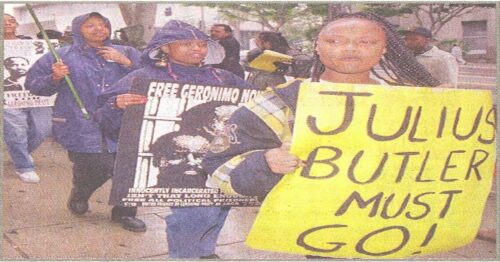 The Context of White Supremacy hosts the 12th study session on Jack Olsen’s Last Man Standing: The Tragedy and Triumph of Geronimo Pratt. Olsen is a White man, and a prolific author. He wrote for Sport Illustrated during the turbulent 1960’s, and penned a celebrated series examining black athletes and Racism. The magazine also credits Olsen with writing one of the best biographies on boxing icon and attempted counter-racist Muhammad Ali. Last week, saw the return of LA prosecuting attorney Gil Garcetti (who’s son is now mayor of Los Angeles). We concluded the O.J. Simpson trial with Garcetti insisting the Juice was guilty and got away with murder. This energy greatly influenced the behavior and posturing of Garcetti and the entire district attorney’s office. Cochran and the Dream Team triumphed at the end of 1995, Pratt supporters protested and drew attention to the ongoing injustice of the Pratt case. Since Garcetti took a public, painful defeat in the Simpson case, it seemed he was not going to easily waffle and allow Pratt to waltz out of prison after a quarter century.

#StillLearning #COINTELPRO
INVEST in The COWS – paypal.me/TheCOWS
The C.O.W.S. Cash App: http://Cash.App/$TheCOWS
The C.O.W.S. Radio Program is specifically engineered for black & non-white listeners – Victims of White Supremacy. The purpose of this program is to provide Victims of White Supremacy with constructive information and suggestions on how to counter Racist Woman & Racist Man.
TUNE IN!
Phone: 1-720-716-7300 – Access Code 564943# Hit star *6 & 1 to enter caller cue
Share This!
Comment Here