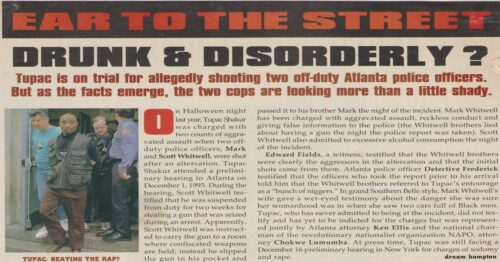 The Context of White Supremacy hosts the 4th study session on Randall Sullivan’s LAbyrinth : A Detective Investigates the Murders of Tupac Shakur and Notorious B. I. G., the Implications of Death Row Records’ Suge Knight, and the Origins of the Los Angeles Police Scandal. Sullivan is an actor, journalist, producer, screenwriter, and author who’s hosted a television program on Oprah Winfrey’s network and written reports for The Washington Post and Rolling Stone. And, he’s a White man. Way back when The C.O.W.S. was in middle of reading Jeffrey Toobin’s The Run of His Life, Gus said that a master class on the Simpson trial would examine that case in context with the beating of Rodney King and the subsequent trial and rioting, the LAPD Rampart scandal, and the assassinations of Tupac Shakur and The Notorious B.I.G. The book club just concluded Geronimo Pratt’s biography, which examines how the very same LAPD and Los Angeles district attorney’s office conspired to keep an innocent black male caged for 25 years – where he could have easily been killed. Importantly, the former Black Panther and COINTELPRO victim Pratt was Shakur’s godparent. Last week, Sullivan provided readers with his version of Shakur and Wallace’s short lives and rap careers. When describing Shakur’s godfather, Pratt, Sullivan omitted mention of Pratt’s release from prison or how the FBI and LAPD seemed to coordinate their COINTELPRO targeting of him. The Black Misandry overflowed, as Sullivan cites rumors of Shakur being anally raped in prison and losing a testicle during his 1994 shooting in New York. Sullivan describes Shakur as being a nerdy young child, far from authentic gangster, who was bullied for being effeminate. When recounting a 1993 assassination attempt in Atlanta, Sullivan describes the off-duty White police officers who shot at Shakur using a stolen police firearm as drunken “yahoos.”