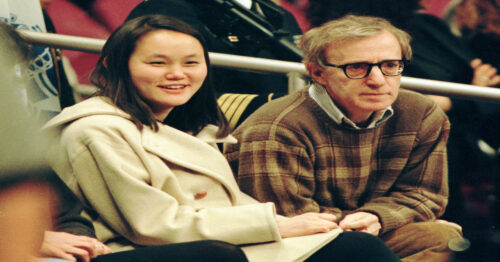 The Context of White Supremacy hosts the third study session on Woody Allen’s Apropos of Nothing. One of the most critically acclaimed directors of all time, Woody Allen is a New York City and entertainment icon. In addition to his flicks, he’s performed comedy, played packed concert halls, and written books – Apropos of Nothing being his most recent. Published in 2020, the text examines his life, celebrated career, and “romance” with Soon-Yi Previn. In addition to being non-white and decades younger than Allen, Previn was Allen’s adopted stepchild. Despite a damning Child Protective Services investigation and years of allegations of child rape and sexual abuse of children, Allen remains beloved my hoards of Whites. We’ll examine this work for what it reveals about White culture. Last week’s session saw Allen details his obsession/fetish with black male musicians. Allen describes swooning over the “primitive”musical sounds of New Orleans artists like Louis Armstrong. While holding tight to his allegation that decades ago, he was at least an average baseball player, Allen divulges that he’s a technological cluts who needs his wife to do everything from changing the time on the clocks to operating the buttons on the television. In fact, his hand-eye-coordination is so deficient he testifies to bashing a number of cars and fleeing the scene of an accident. Tellingly, Allen describes his so-called love life as: “The Theater of the Absurd.” He rattles off a number of romantic dates from his youth, where females concocted all manner of excuse and made haste departing his company.