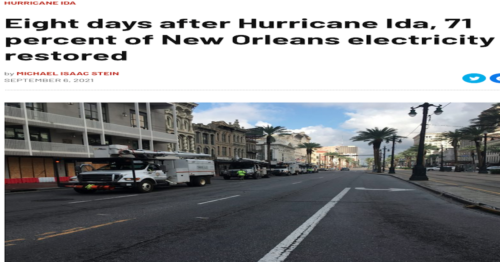 The Context of White Supremacy welcomes the return of Anitra Brown. Editor of the New Orleans Tribune, Brown has decades of experience as a top-notch journalist covering the “Crescent City.” A New Orleans native, Brown survived Hurricane Katrina and helped the Tribune delivery powerful reporting on the myriad ways black residents were abused and purged from the city following Katrina. We’ll discuss the impact of Hurricane Ida – which forced Brown to relocate to Texas.Crumbling infrastructure resulted in one million residents losing power following the storm. Many are still without power and running water. We’ll ask if this event could be used to purge more black residents from the city, and the impact of climate change on a seemingly vulnerable region.
#WhiteSupremacyIsTheStorm
INVEST in The COWS – paypal.me/TheCOWS
The C.O.W.S. Cash App: http://Cash.App/$TheCOWS
Share This!
Comment Here