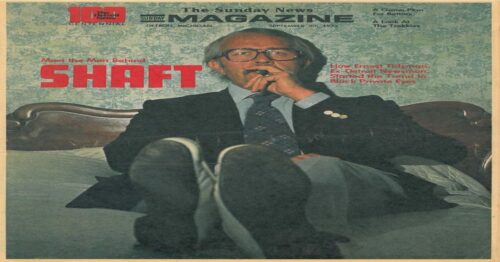 The Context of White Supremacy hosts the second study session on Ernest Tidyman’s 1970 novel, SHAFT. Tidyman is a White man. He forged a distinguished journalism career working for The New York Times and Ohio’s The Plain Dealer. In the midst of the so called Civil Rights Movement and the unrest of the 1960’s, Tidyman decided to concoct a narrative around a black private detective named John SHAFT. This relatively short book sparked a half century of trashy films and mightily influenced the thoughts, speech, action, emotions, and wardrobe of generations of black people. Most of these victims are clueless that their favorite black action hero is the creation of a White man. During the premier session, Gus and listeners were shocked by Tidyman’s vulgarity, homoeroticism and slurs. He routinely employs the word “fag,” and has SHAFT pretend to set up a date for homosexual/anti-sexual activity with a “gay” White Man. While speaking with the police, Tidyman places SHAFT in a the “butt-cupping grip” of a steel chair. Similar to Romain Gary’s WHITE DOG, the White male author obsessives over the black male physique. Tidyman greatly details the black body of John SHAFT, including scars received while fighting in Vietnam. Tidyman was reportedly unhappy that’s SHAFT’s veteran status was excised from the movie. When not being ogled by the White Men of New York, SHAFT has sexual intercourse with a White Woman. In between all this, a black male dies, and SHAFT gets a shoe shine from a black “shine boy,” whom Tidyman describes as neutered.