BTR News – By now, millions of people in the United States and around the world have seen the video of a customer getting pummeled by the female McDonald’s employee in St. Petersburg, Florida who was protecting herself after an attempt to violently pull her over the counter. Apparently, everyone did not watch the same video of the altercation or a lot of people need to go in for an eye exam because several people accused the male employees, with one specifically calling out the Black male employee, as to allowing the female employee to be attacked by a crazed customer who received the worst of the physical interaction.

You would think this blatant misrepresentation would be coming primarily from misandrist feminists who use every opportunity to attack men but you would be wrong in thinking so, although I’m sure there were some misandry promoting tweets coming from that corner of the Twitterverse about the incident. For some reason, misandry and black male bashing are allowed on Twitter.

I was first alerted to the potential problem when a Muslim activist on Twitter said that “the male employees just stood around” in a tweet that has since been deleted. Then I read an article on The Root by Michael Harriot perhaps the source of the activist’s misinformation. Mr. Harriot’s articles read less like news articles and more like he is writing skits for a comedy show instead of a of serious news outlet, which brings into question, how seriously do the editors at The Root take racism or journalism in their reporting on race-related terrorism in the USA. With no apparent fact-checking in place at The Root, Mr. Hariot wrote…

Someone can be heard repeatedly saying “get the police.” Meanwhile, the other men on the McDonald’s crew watch helplessly, obviously astonished that their coworker was decidedly not “lovin’ it,” as their motto implies. Davis did not sustain any bodily injuries, according to the police report.

Perhaps accuracy in reporting is not as important as cracking jokes and entertaining their readers to Mr. Michael Harriot and The Root editors.

Where do we start deconstructing this false narrative? First off, one of the two images used in The Root article, clearly shows the male employee standing there witnessing the altercation from the start, trying to preemptively intervene at the exact same time that the customer reached to grab the young woman who has been identified as amateur boxer Yasmine James. 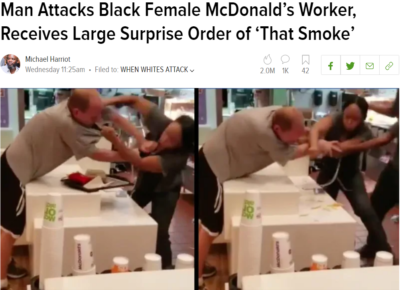 The other thing wrong with Harriot’s narrative is that there was only one other employee who was there with Ms. James when the customer reached across the counter at the same time as he was reaching to get her to disengage with the man arguing with her about a straw. The entire interaction lasted all of 16 seconds and was over by the time the other employees rushed from the back of the work area to see what was going on. One of the male employees did get there at the tail end of it and made an attempt to separate Ms. James from her attacker but the other employee who was there from the start had already walked around the counter to pull the customer away from Ms. James.

In addition to Mr. Harriot’s false narrative, Black filmmaker Tariq Nasheed specifically attacked the character of the Black male employee by claiming he just stood around while the Black woman was attacked by a white man. He could have also been referring to all the Black male employees but there was at least one other Black female employee who with the other employees, arrived after the physical altercation was over which again, lasted 16 seconds, not sixteen minutes. 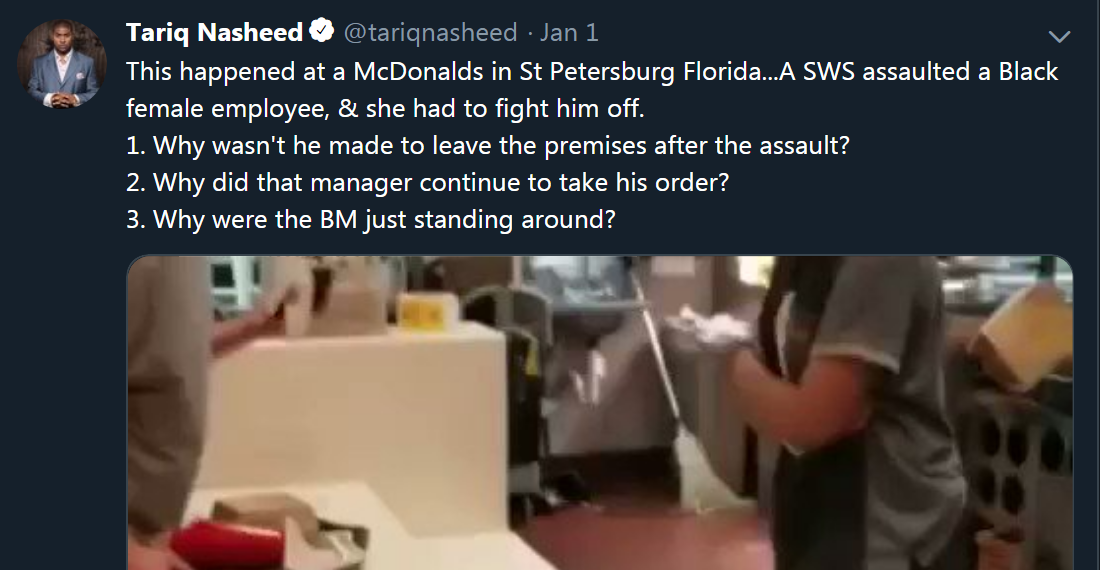 Obviously, Mr. Nasheed watched the same copy of the video the majority off people watched because he posted it. Let’s deconstruct his narrative which he laid out with three points.

1. The Customer was told to leave and was later arrested but why would you tell the criminal to leave if Ms. James’s intent was to have him arrested as she clearly states after the altercation before he leaves and assaults another employee upon his exit. The assailant, 40-year-old Daniel Willis Taylor, would eventually be arrested shortly after.

2. The customer was not attempting to place an order, he had already ordered and the altercation was about not getting a straw with his order or something to that effect. The customer demanded a refund from the manager but it is not clear from the video if he received one. The question that needs to be asked of the manager is why did he tell Ms. James to go home as if she had done something wrong instead of asking her and the witness, the black male employee what happened?

3. We have already established that the “BM” was not “just standing around” since he was engaged from the start. Perhaps some may disagree with how he intervened but he intervened nonetheless so we must ask why is Nasheed attacking the Black male with a false narrative?

To answer the last question, after reviewing Mr. Nasheed’s Twitter account over the past few days, he seems to be pandering to misandrist Black feminists who at every turn like to tell us how the Black man is worthless and not protecting Black women from anyone with him possibly being the sole exception to this asinine concept. This narrative is a blatant misrepresentation of the relationship between Black men and women based on anecdotal evidence that some Black men have committed crimes against Black women. Yet, despite the violence against women in every group, we don’t see white women, Arab women or Hispanic women involved in a campaign to smear all the men in their group as not protecting them from predators and criminals. Perhaps because they find it absurd to speak in such generalized stereotypical terms.

I point out all this to say, borrowing a quote, when it comes to both the mainstream media and cult personalities on social media, it is best to “Believe nothing you hear, and only one half that you see”. There is no logical reason for the Muslim activist, Michael Harriot or Tariq Nasheed to put out false information about this altercation and only they can answer the questions about why they chose to mischaracterize the video of the incident. Are they predisposed to telling lies or do they need to get an eye exam along with every single person who cosigned on to their anti-black misandry?

Scotty Reid is the founder of the non-profit media organization Black Talk Media Project which has been around for over 10 years. He is the host and producer of the BTR News podcast and New Abolitionists Radio which he has co-hosted for several years. He is a free-thinking Christian prison slavery abolitionist who can’t be put in a box politically, socially or otherwise. He is the father of three and a US Army Veteran of the Gulf War. He has been producing news talk programming since 2007 and has interviewed hundreds of guests on various topics over the years. His favorite movie line is from Forrest Gump, “Are you stupid or something?”. Check out podcast archives here and here.