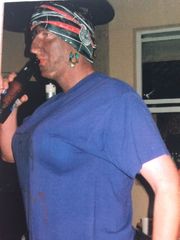 BTR News – Michael Ertel, the newly appointed Secretary of State of newly elected Gov. Ron DeSantis, has lost his big promotion in less than a month. Ertel tendered his resignation after photos emerged of him posing as a Hurricane Katrina victim in blackface at a private Halloween party over ten years ago. “The governor accepted Secretary Ertel’s resignation,” the Governor’s Office said hoping to not get mired in “controversy”. “It’s unfortunate. He’s done a lot of good work,” DeSantis said at a press conference announcing the Ertel’s resignation because “I don’t want to get mired in side controversies.”

The photo was taken in 2005, eight months after Ertel was appointed Seminole County supervisor of elections and two months after Hurricane Katrina devastated New Orleans. Ertel did not have anything to say when he has texted the photos and asked for comment by the Tallahassee Democrat, a Florida newspaper. The photos were then sent to the Governor’s office.