New Abolitionists Radio – This week our guest speaker will be Melissa Holmes, CEO of Love Shouldn’t Hurt which focuses on Domestic Violence. We hope to discuss the various ways women end up in US prison slavery which includes those who were in abusive life-threatening situations. 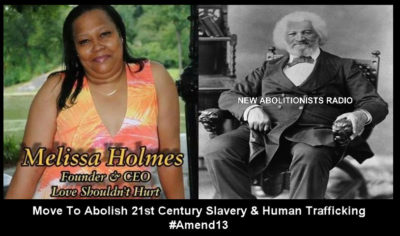 We want to also remind the community that women and particularly Black women have been the fastest growing segment of the US prison slave population. Love Shouldn’t Hurt NY, Inc. is based in the Bronx, NY and has a support group on Facebook.

The About page states…

LSH is an awareness and support group, which is comprised of victims, survivors and lots of supporters. After surving two abusive relationships, I, Melissa Holmes started LSH, as a secret group on social media. I was looking for an arena to vent and support others who had or is suffering DV.

LSH is giving a sense of purpose through our daily prayers and supportive post, motivating people to leave abusive situations and helping them heal. There has been occasions where LSH has assisted victims in escaping there abusers. Read More.