Tonight New Abolitionists Radio will discuss two measures signed into law in New Jersey by Gov. Phil Murphy that make it easier for those convicted of low-level drug offenses to expunge their records and another that allows citizens on parole or probation to vote. New Jersey native and prison slavery abolitionists Maxwell Melvins who helped to push the bills is with us tonight to discuss these measures.

Advocates for Prisoner’s Human Rights are calling on the community to start organizing solidarity events from August 21st – September 9th to amplify calls for human rights for prisoners. 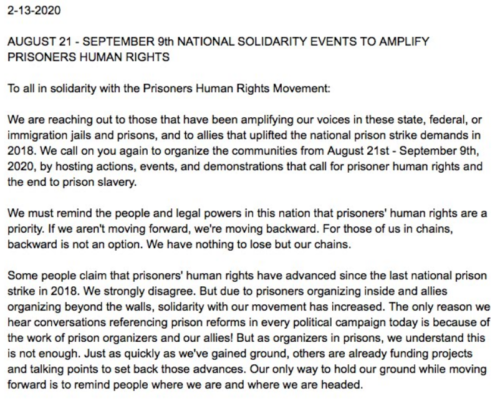 We must point out that concerning prisoner human rights demands that came out of the 2018 national prisoner strike, many of those demands are part of Bernie Sander’s Justice and Safety For All platform titled “Prisoner Bill of Rights”. After victories in Iowa and New Hampshire, Sanders heads towards Super Tuesday as a front runner. No other candidate nor President Donald Trump has a plan to restore the human rights and constitutional rights of prisoners in the United States, and strangely, not many prisoner advocacy groups are organizing prisoner families to turn out to vote for Sanders to advance the most comprehensive reforms ever proposed by a presidential candidate for the US prison system.