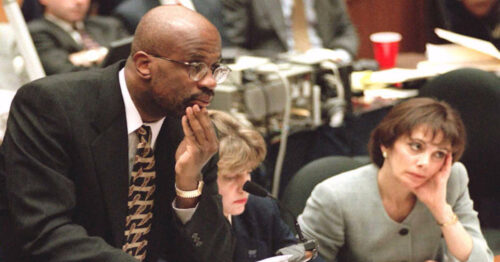 The Context of White Supremacy hosts the 8th study session on Jeffrey Toobin’s The Run of His Life: The People v. O.J. Simpson. This 1996 New York Times bestseller enjoyed two different waves of success. It was critically acclaimed during the initial mid-90’s publication and enjoyed re-newed success following the critically acclaimed and widely adored 2016 FX miniseries – which is based on Toobin’s work. Toobin compiled three glorious decades of journalism, spawned from his coverage of the Simpson trial. He wrote beloved books on the Supreme Court and authored a scathing indictment of President Donald J. Trump. Things were triumphant until the year of the rona. While participating in a live Zoom conference with prominent White journalists, Toobin brandished his penis and began masturbating. He was initially suspended by the New Yorker. After an investigation, Toobin was terminated. We’ll keep this in mind while reading his account of the most well documented, most watched court trial of all time. Last week’s session detailed how the jury eventually consisted of 8 black females, 2 non-black males, and 2 White Women. Marcia Clark thought black females were her “gals” and would align with she in convicting a toxic black male. Jury consultants informed the defense and prosecution that black females were Simpson’s most supportive group and that they did not empathize with Nicole Brown Simpson #GoldDigger Toobin emphasizes the alleged lowbrow nature of the predominantly black female group – highlighting their lack of education and income, minuscule reading tendencies, and overwhelmingly Democratic political views. Toobin also described Faye Resnick as another White heroine who could have helped secure a guilty verdict had she testified. Resnick wrote a bestselling book that was published during jury selection for the trial. As Resnick writes about OJ’s alleged domestic abuse in addition to she and her friend Nicole’s reckless drug use and sexual activity, it’s hard to imagine jurors regarding her as a credible witness.