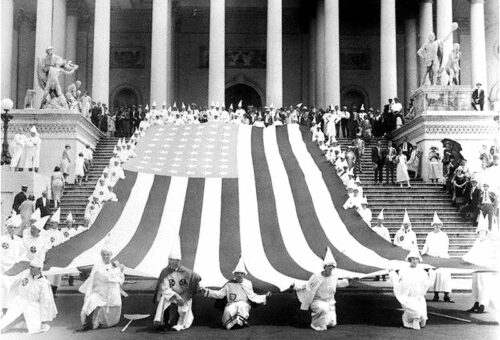 The Context of White Supremacy welcomes Kelly J Baker. An writer, researcher, mother and White Woman, Baker is editor of Women in Higher Education, “a feminist newsletter with the continued goal ‘to enlighten, encourage, empower and enrage women on campus.'” She also editor at The National Teaching and Learning Forum and the volunteer magazine Disability Acts. The New York Times recently interviewed Baker to share her views on the January 6th Capitol siege. She penned the 2011 award-winning text, Gospel According to the Klan: The KKK’s Appeal to Protestant America, 1915-1930, and called attention to the long history of White Terrorist violence in the U.S. We’ll discuss how religion helped motivate the last months bloody insurrection as well as the role of White Women. We’ll also discuss the prospects for prosecuting the White perpetrators seeing that the ringleader and former president has been acquitted of wrongdoing.