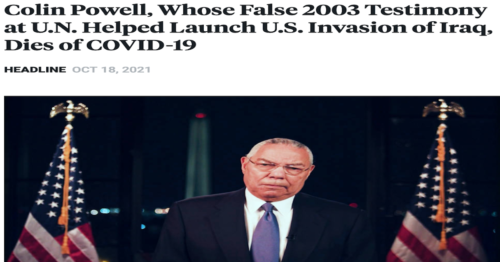 4-star U.S. General Colin Powell died this from Covid-19 complications at the age of 84. He was fully vaccinated, however, he was reportedly immunocompromised after battling chest cancer. Powell is recognized as the first black Secretary of State, and advised numerous U.S. presidents. Moments after his death, numerous pundits focused on the “black stain” on Powell’s record: his 2003 testimony to the United Nations that alleged there were Weapons of Mass Destruction in Iraq. Many White and non-white people spoke as if President George W. Bush and other Whites would not have been able to wage war if it were not for Mr. Powell. In Georgia, jury selection commenced in the Ahmaud Arbery murder trial.