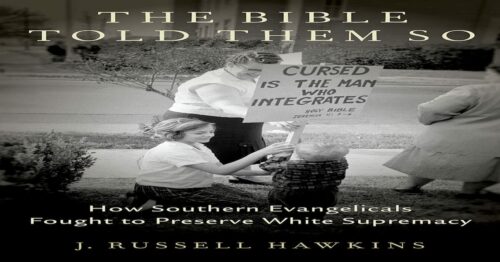 The Context of White Supremacy welcomes Dr. J. Russell Hawkins. A Professor of Humanities and History at Indiana Wesleyan University, Dr. Hawkins studies theology, U.S. history and White Supremacy. He recently published a book, The Bible Told Them so: How Southern Evangelicals Fought to Preserve White Supremacy. Earlier version of this book did not feature the term White Supremacy. Dr. Hawkins details how for most Whites in South Carolina and beyond, their brand of Christianity said that White Jesus made the “races” separate and made the negro to serve Whites. When the 1954 Brown v. Board of education decision was rendered, White Christians often formed the backbone of Massive White Resistance. We’ll emphasize Mr. Neely Fuller Jr’s conclusion that the System of White Supremacy is the strongest Religion in the known universe. We’ll also emphasize the importance of correct words and accuracy. White Supremacy/Racism is not “separation.” White Supremacists have never and would never permit non-white people to remain “separate” from them. U.S. Senator Strom Thurmond’s rape of Carie Butler is irrefutable proof that White Supremacists have no interest in being “separate” from their niggras. Gus concludes it is a deliberate act of White Supremacy when Whites like Professor Hawkins omit Whites’ habitual sexual abuse of black people.
#StromThurmond
INVEST in The COWS –
http://paypal.me/TheCOWS
Cash App: https://cash.app/$TheCOWS
CALL IN NUMBER: 720.716.7300 CODE 564943# Press *61