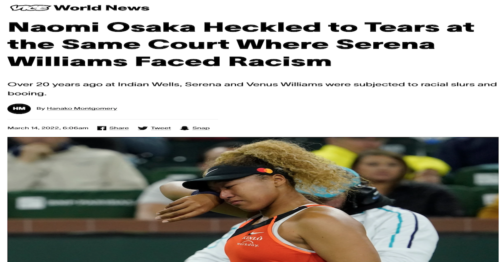 In the U.S., Whites moved the clocks ahead one hour, mimicking the late Biz Markie’s call that: spring is here. Incidentally, the US Senate passed legislation that could make daylight savings time permanent. Tennis season is rolling strong, and world champion Naomi Osaka broke down into tears after being heckled by White spectators during a match at the BNP Paribas Open, formerly Indian Wells. Osaka commented that she was especially pained because she knew the history of VeMelaninus and Serena Williams being terrorized at this same venue in 2001. Ironically, Osaka’s opponent, Veronika Kudermetova, is a “Russian national,” but she was not jeered. Reports of the Russian invasion of Ukraine continue, as do reports of flagrant White Supremacy being practiced against non-white refugees of this region. Ukranian president Volodymyr Zelenskyy asked the mostly White members of the U.S. Congress to step up their help in countering Russian aggression. At the end of the week, President Biden reportedly issued warnings to China about involving themselves in a conflict between Whites.
#SnuffyDoneGotTheRona