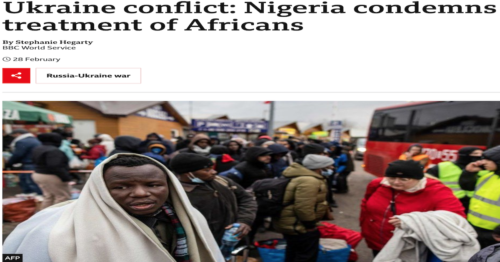 The Context of White Supremacy’s monthly Global Sunday Talk on Racism. This broadcast is intended to encourage participation from non-white people in different parts of the world and Victims of Racism who are not able to join during the normal broadcast time. World attention is focused on the #WhiteOnWhiteCrime with the Russian invasion on the Ukraine. News outlets from around the globe report that black and non-white refugees have been blocked from sanctuary and subject to White Supremacy at the borders. We’ll discuss how these events are impacting daily activities across Europe. We’ll also discuss President Joe Biden’s warning if the non-white people in China involve themselves in the White squabble in the Ukraine. In London, reports revealed that in 2020, a 15-year old black female was accused of cannabis possession and strip-searched. Apparently, the black girl was on her menstrual cycle and was required to remove her sanitary towel, spread her cheeks, and cough. We’ll discuss the recent protests around this barbarous attack as well as the global criminalization and “adultification” of black boys and girls. #ChildQ