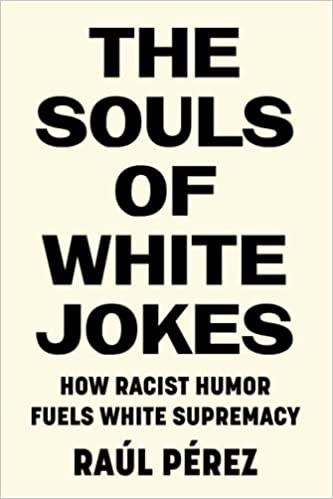 The Context of White Supremacy Radio Program welcomes Dr. Raúl Pérez. An assistant professor of sociology at the University of La Verne in California, Dr. Pérez teaches courses on Racial and Ethnic Relations, Racism and Anti-Racism, Research Methods, and Comedy and Society. For thirteen agonizing years, Gus T. has hosted The C.O.W.S. Radio Program and strenuously re-stated that Racist Jokes are a critically important component of White culture and undeniable evidence that Whites are not ignorant, but, rather, dedicated and “tickled pink” about terrorizing non-white people (especially those designated black). We’ve asked hundreds of White guests from around the globe to share Racist jokes with us – typically, they refuse. A “cotton-picking” twitter follower alerted Gus to Dr. Pérez’s new book, The Souls of White Jokes: How Racist Humor Fuels White Supremacy.  Gus was extremely reluctant since we have a strict WHITE GUEST ONLY POLICY at The C.O.W.S. However, this text makes many of the same observations Gus has noted for over a decade. Unfortunately, Dr. Pérez still suggests the dangerous lie of “white ignorance,” and he sometimes narrows the focus to so-called “right wing,” and “far right” extreme groups, when Racists jokes are the foundation of what it means to be White throughout the universe. President Obama is a central character in this book – as is the word “coon.”