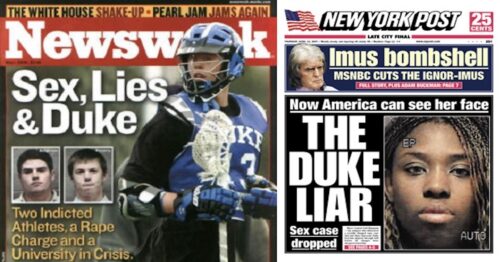 The Context of White Supremacy welcomes William D. Cohan. a former senior Wall Street M&A investment banker and Duke University alumnus, Cohan is a journalist and special correspondent. He’s written a number of bestselling books exploring politics and finance. We’ll discuss his 2014 offering, The Price of Silence: The Duke Lacrosse Scandal – which explores the controversial 2006 charges that several White players from the Duke Lacrosse team raped a black female dancer. All charges were eventually dismissed and all Duke players were declared innocent of any sexual misconduct. Evidence showed that prosecuting attorney Mike Nifong conspired to conceal exculpatory evidence and willfully lied to pursue a conviction. Nifong was eventually disbarred, convicted of contempt, and forced to serve a day in prison for his misconduct in this case. Gus recently learned about Darryl Howard, a black male who served 23 years in a North Carolina cage for a double murder he did not commit. Nifong prosecuted Howard in this case and is accused of helping to convict an innocent black male. We’ll discuss what Duke Lacrosse scandal revealed about White Supremacy/Racism and relate this historic event to the recent #MeToo clamor, which demands that we always believe someone who charges they have been raped.