By Scotty Reid – The fallout continues from the thus far failed coup attempt by Trump supporters in which more than 50 police officers were reportedly injured and 15 hospitalized in confrontations with several factions of groups that support Trump which he has used to threaten the U.S. public and elected officials across the nation with mob violence.

Reportedly one DC Capital police officer was taken off life support Thursday evening after suffering serious injuries inflicted by the terrorists who forcefully entered the capital building during a joint session of  Congress. A U.S. Capitol Police press release on January 7, announced the death of Brain D. Sicknick and it reads in part…

Officer Sicknick was responding to the riots on Wednesday, January 6, 2021, at the U.S. Capitol and was injured while physically engaging with protesters.  He returned to his division office and collapsed.  He was taken to a local hospital where he succumbed to his injuries.”

Some members of the Republican party have lain the blame of the insurrection squarely at the feet of Donald Trump, where it should be but he wasn’t alone in his conspiracy to pull off what looks like a failed election coup.  Shamelessly and quite cowardly I might add, we have Republicans at every level of government who still are giving credence to the countless election fraud conspiracies spouted by Trump and ludicrously are trying to disassociate the President from the violence he has been widely documented instigating.

The “Save America” rally was widely broadcast online where Trump and those in his inner circle who spoke at the rally, were recorded told telling those in attendance to go to the capitol building and that “weakness” would not get it done and other such incendiary rhetoric. Trump used the opportunity to once again publicly lobby his vice president Mike Pence to commit a federal crime towards his cause of overturning the 2020 election result.

Although the Congress was delayed in their election duties by the intrusion of the violent mob that descended on the nation’s capital to so-called “stop the steal”, Vice President Mike Pence would carry out his role in lawfully certifying the election results ending the process of recognizing the winner of the 2020 presidential contest.

Where are the police union heads and defenders in calling for hunting down those who killed Officer Sicknick and injured all those others? Why are they not calling for the perpetrators to be hunted down, trapped, and burned alive like those LEOS did when they hunted down and murdered Christopher Dorner, a former U.S. vet, and cop who waged war on what he called a corrupt Los Angeles police department?

Although the Black community has known since the formation of the KKK in the 1800s, that among their secret ranks, included law enforcement officers. African-Americans did not need the FBI to issue a report in 2006 that “ghost skins”, cops and deputies who secretly white supremacist belief systems and belonged to white nationalist groups had “infiltrated” the ranks of law enforcement at the highest levels. African-Americans have always known this and written or spoken about it over several generations.
I believe the Biden Administration and Congress should declassify that Bush era FBI report and publish it unredacted and include it in any congressional hearings that may arise from the security collapse in the capitol. 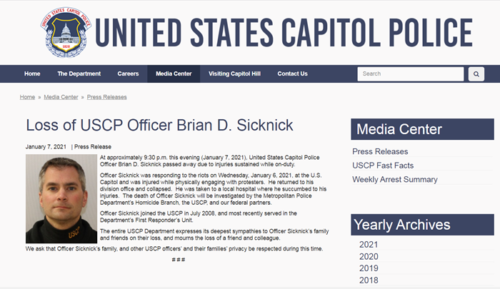 What I believe should happen is a lot different from what will happen and if history is any guide, the Biden administration like all previous administrations including the Obama administration, will continue to be soft on white people committing acts of insurrection, terrorism, and treason and that’s why we still have hundreds of confederate monuments adorning public spaces being maintained by the state and/or county government using US citizen’s tax dollars.

We shall see what the coming weeks reveal in terms of how the US government and states plan on dealing with this generation of insurrectionists moving forward or will it continue to be soft on terrorism which they tell us only emboldens the enemies of the U.S.A.

This has been Scotty Reid with a BTR News commentary asking you to support my work through the Black Talk Media Project with a tax-deductible donation today. Please share and subscribe to this free podcast and many others offered on the Black Talk Radio Network.