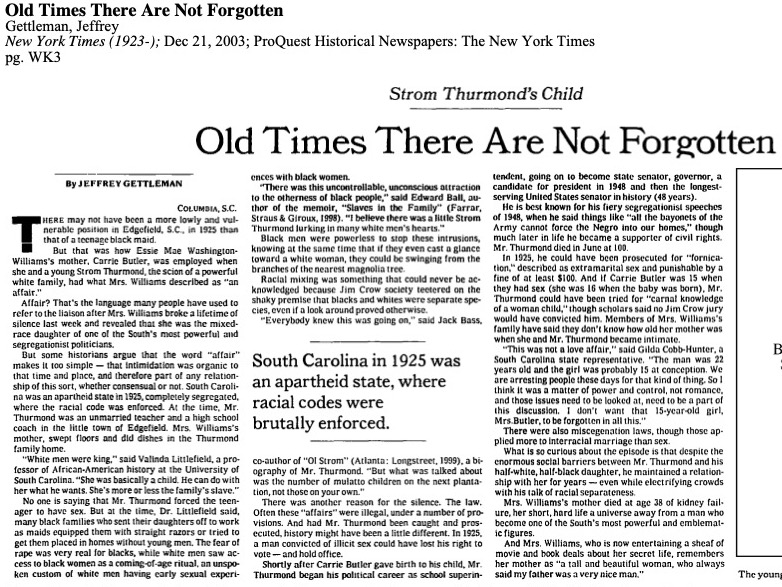 The Context of White Supremacy hosts the second study session on Essie Mae Washington-Williams’ Dear Senator: A Memoir by the Daughter of Strom Thurmond. **Unfortunately, a tech issue caused distortion in Gus’s audio during the middle portion of the broadcast. The problem was corrected before the end of the program.** Gus was really excited to read a different book, but then Dr. J. Russell Hawkins made some likely Racist commentary about not knowing that Senator Thurmond raped a black child and omitting this sexual deviance from his book. Dr. Hawkins mentions Sen. Thurmond throughout his book, documenting the countless letters White parents mailed the lawmaker to voice their fears that their daughters would be ravaged by black school boys. Dr. Hawkins’ conduct is repeated by Whites collectively. Last week, Ms. Essie Mae describes growing up in Coatesville, Pennsylvania thinking that she knew her mother and father. Then one day at 13, Carrie Butler informed her that she wasn’t her “aunt,” but, rather, her mother. Ms. Essie Mae details the challenges and joy of bonding with her mother while still clueless about her real father. She graphically describes the 1911 lynching of Zachariah Walker, which happened a few years before her birth and greatly traumatized her black caregivers and neighbors. She also details attending a separate school exclusively for black children and how the experience branded White superiority into her psyche. This episode features audio and written commentary from Jonetta Rose Barras, author of Whatever Happened to Daddy’s Little Girl?